A public service campaign leading up to the elections

One of Pakistan’s leading production houses, SOC Films, helmed by the two-time Academy Award winner SharmeenObaid-Chinoy, has launched ‘Shor NahiAwaazBano’ – a public service campaign leading up to the elections on 25th July 2018.

#ShorNahiAwaazBano will comprise of a series of public announcements both in English and Urdu leading up to the elections in the form of visuals and videos emphasizing the need to exercise one’s vote.

“This campaign is conceptualized and initiated by my team at SOC Films who feel very strongly that this is an important elections and one in which people cannot sit on the sidelines. The idea is to educate voters about their rights, what to expect on Election Day, why voting matters, how to vote and information about polling stations. We are deploying and dedicating our social media for this campaign and encouraging everyone to share these widely. The future of Pakistan depends on the willingness to vote.” said SharmeenObaid-Chinoy.

The campaign, #ShorNahiAwaazBano, kicked-off with a visual both in Urdu and Englishon how to check voter registration and respective electoral area. 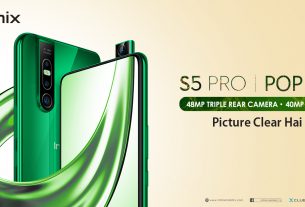