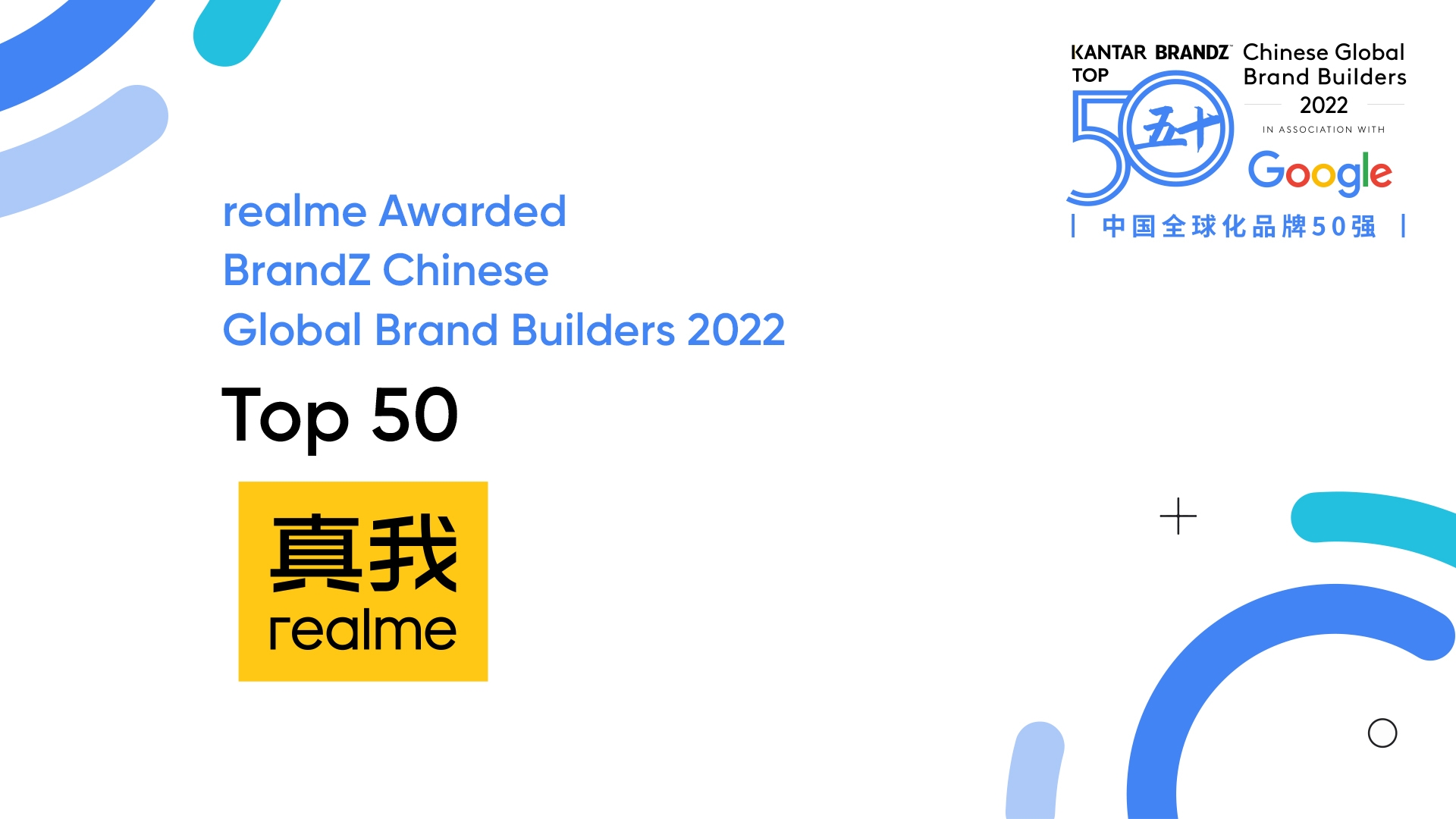 In the vast sea of international businesses, getting lost among the crowd is easy, but not for realme, the Chinese smartphone and technology brand. Since entering the market in August 2018, realme has surpassed the global sales volume of 100million within 2021within just three years, earning the title of being the fastest emerging smartphone brand to achieve this. With the passing of every year, Google and Kantar come forward with their ranking of Chinese global brands to gauge the impact these brands have had on consumers in the global market.

For the first time since its debut in the international market, the realm has made its way onto the Kantar BrandZ Chinese Global Brand Builders 2022 TOP 50. Not only has realme the youngest brand to break into the ranking, but the tech democratizer has also given the special honor of receiving the award for Best Newcomer for Balanced Growth. Being placed on this list means that realm has finally transitioned from being a rising star in the industry to a brand with great global influence has the preferred choice of young people worldwide.

As a brand, realms philosophy caters to the global youth population, embodying the core values, they hold dear, such as adventure, activism, and cost-effectiveness. In the past four years, the realm has spread laterally into the market, introducing high-quality products with leap-forward performance and trendsetting design to young users in 61 global markets. In the future, real plans to dive further into its strategic markets, focusing on becoming more influential in those territories.

The rankings of the BrandZ Chinese Global Brand Builders Top 50 are based on a survey of over 1 million users across 11 countries, which are used to compute each brand’s power score. A comprehensive analysis of the brand power score has used to put the rankings together. The BrandZ Chinese Global Brand Builders Top 50 provides a scale to measure the international influence of Chinese brands and has authority and credibility worldwide. Compared to last year, real men’s brand power has shot up by 20% in the 11 surveyed markets, with a 70% growth rate in the seven developed markets surveyed. With its debut on the list, realme has a brand power score of 294, ranking among the top 13 brands in the consumer electronics category. Developed markets account for 50% of realms’ calculated brand power.

In recent years, the realm’s global market share has continued to grow, and its product sales continue to rise. In Q1 of 2022, realme has a year-on-year Growth of 13%, defying the trend in 14 markets. In some European markets, such as Spain, Greece, and the Czech Republic, realme’smarket share has entered the top five, with an overall growth rate of 177%. The South and South-East Asian markets also have a good performance, with realme taking 16% of the share in India and entering the top three this year. South America, Middle Asia, and other markets have also made breakthroughs, with realme being among the top 5 brands in terms of market share in Morocco, Peru, and Egypt, among other countries.

realme has built with its DNA of globalization and has successfully established an integrated global network of operations. In the future, realme plans to deepen its global layout and grow into a high-tech and trendsetting brand with global influence. realme has big plans for the Pakistani market as its low-cost, high-tech product line has wide appeal in the country and hopes to emulate the growth it has had in other markets within Pakistan.