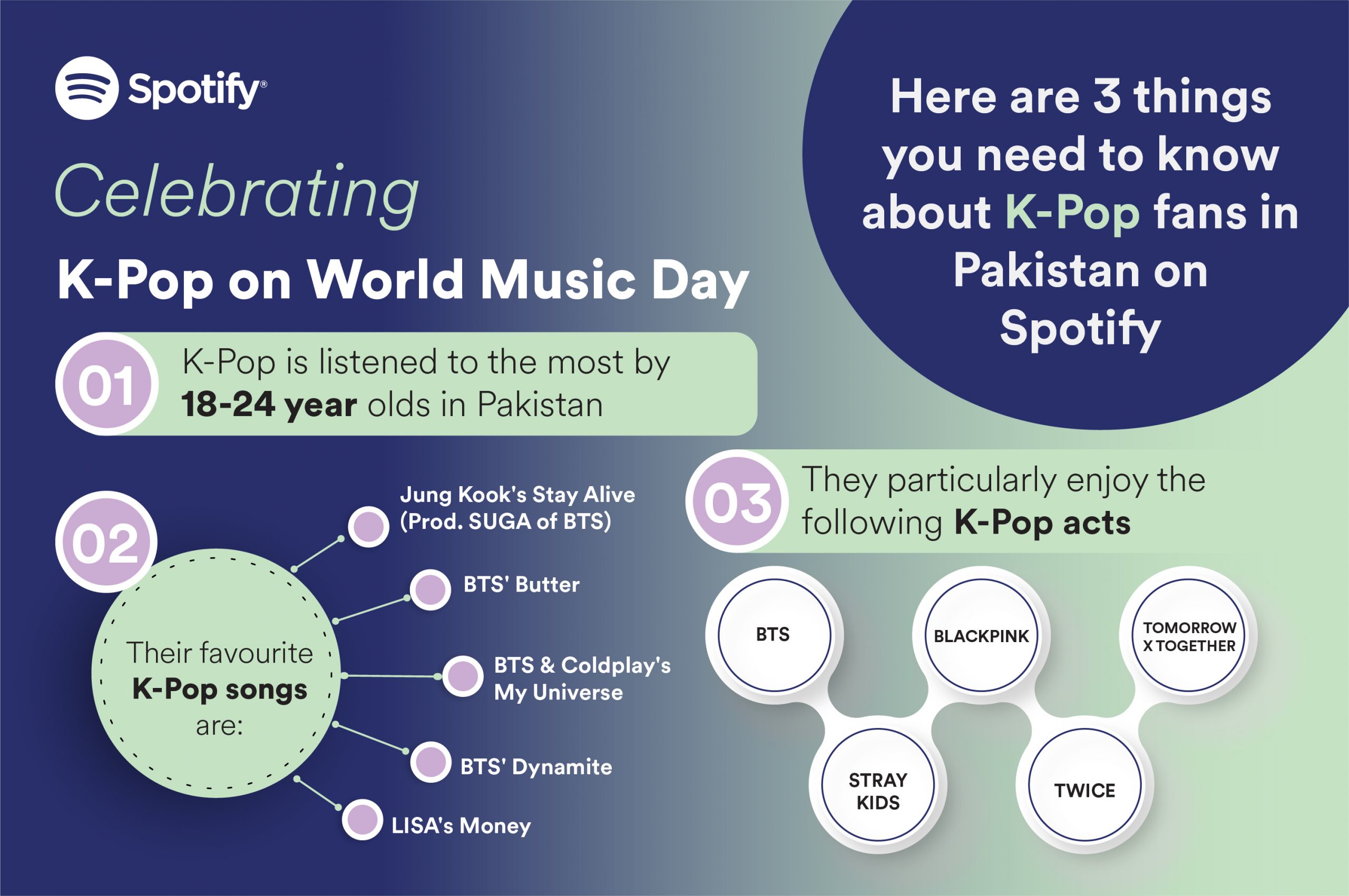 With the growing popularity of K-Pop in Pakistan, Spotify unveils the data on K-Pop consumption in the market and ‘K-Pop ON! Track’ – a new site dedicated to the genre

Never before has Pakistan’s music scene witnessed a fan base more dedicated to the artists they love than with K-Pop. From birthday celebrations held for their favorite musicians to social media trends on the release of new albums, we’ve seen it all.  In a country where many would imply that foreign language tracks might find it hard to gain traction, K-Pop  has defied all odds.

It all started with BTS, the groundbreaking group of seven Korean youngsters who rose to fame in 2013 with their debut album ‘2 Cool 4 Skool’ and ‘O! RUL8,2’, the first extended play by the idol group released in the same year, and soon made in-roads into the Pakistani market. Their popularity has hit unprecedented levels, and it seems to show no signs of receding soon as their music continues to top the charts.

According to the data revealed by Spotify between March 2021 to March 2022, streaming of K-Pop tunes saw a 56% rise with Gen Z, the segment falling between 18 to 24 years of age, being the most avid listeners of the genre making up to more than 50% of the total streams of K-Pop in the country.

The love for K-Pop and BTS in particular is evident from dedicated fan bases in the form of social media groups that go all-out for the acts that they hold close to their heart. BTS Pakistan Official is a prime example with more than 16,000 followers as of June 2021, the page is one of the biggest and most prominent communities of BTS loyalists in Pakistan.

“Back in 2014, I discovered the world of K-Pop through my friend who introduced me to some great music. The unique fashion style, vibe and of course the synchronized dance moves had me really intrigued. However, I officially became an ARMY in 2015, during the ‘I Need You’ era,” commented Hajra Gilani. Studying in South Korea, Hajra is the Head Admin and founder of the BTS Pakistan Official Fan Club.

Hajra’s journey started from attending a single BTS concert live. Terming “post-concert depression” as a real phenomenon, she was plagued with a plethora of questions. Was there a possibility to interact with more BTS Armies and how could a community be built around this love in Pakistan? These queries stirred a new dream in her to get BTS recognized in Pakistan and Pakistan to be recognized by the boys themselves.

“I started the fanbase back in 2016 . That was a time when there was no proper BTS fanbase in Pakistan.. I was fortunate to get the chance of seeing the boys live during their Epilogue tour. It was a girl’s dream come true after all the struggles and hard work. And I could surely say THAT WAS THE BEST DAY OF MY ENTIRE LIFE!!!” she added, further explaining how BTS and K-Pop left one of the greatest impressions on her life.

The consumption of music from abroad has greatly increased in Pakistan since Spotify launched in the country with K-Pop songs frequently appearing on Spotify Charts. According to Spotify’s data from February to May of 2022, not only BTS, but also BLACKPINK, TOMORROW X TOGETHER, Stray Kids, and TWICE have become the most popular K-Pop acts being streamed by Pakistanis. Additionally, the top 5 most popular K-Pop songs in Pakistan include Jung Kook’s Stay Alive (Prod. by SUGA of BTS), BTS’ Butter, BTS & Coldplay’s My Universe, BTS’s Dynamite, and Black Pink’s LISA’s Money.

Speaking about the appeal of K-Pop, Majid Mushtaq, another well-established name in the world of Korean pop followers, said, “2016 was the time when I developed a passion and interest in K-Pop. At first, I was listening to K-Pop songs with the goal to improve my Korean, but the more I kept diving into this genre, the more I started loving the lyrics, foot-tapping beats, and the music overall.”

“In my opinion, some of the main reasons behind BTS’s popularity in Pakistan include the story behind their success, the message in their lyrics, down-to-earth attitude, world-class dance moves, and love for their fandom.”

Fans will also be pleased to know that Spotify has just launched a site dedicated to all things K-Pop, bringing fans closer to the music they love and the artists who create it. K-Pop ON! Track will provide anyone from the K-Pop curious to bonafide K-Pop Stans a home base for all of Spotify’s K-Pop news, as well as exclusive artist interviews, happenings within the industry, up-and-coming trends and more.

Curated to complement the streaming experience, K-Pop ON! Track is chock-full of content that will take fans deeper into the K-Pop universe. From breaking down the wide world of Kpop terminology to step-by-step guides on creating a Spotify Blend playlist with BTS, from a series dedicated to who ‘We Stan’ (kicking off with NCT127) to sit-downs with Spotify’s K-Pop music experts, the site celebrates the talent behind the tracks and the fans at the forefront of K-Pop.

Get closer to the beat of K-Pop by visiting Spotify’s K-Pop ON! Track HERE. 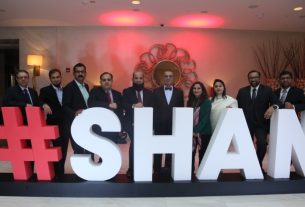