CCI Pakistan,Coca-Cola’s bottler in Pakistan inaugurated its Greenfield bottling plant in Faisalabad today.CCI Pakistan is a subsidiary of Coca-Cola İçecek (CCI), headquartered in Turkey, the sixth-largest bottler in the Coca-Cola system globally. Set up with an investment of US$ 45 million, the facility is CCI Pakistan’s 6th plant in the country and CCI’s 26th in the region. The new plant in Faisalabad comprises of CCI’s fastest and highest capacity PET lines and will add 450 million liters to the company’s volume annually. CCI has invested more than US$ 500 million in its business in Pakistan since 2008.

CCI Pakistanhas a total of 25 production lines, 530+ distributors and more 330,000 sales points and is catering to a consumer base of 208 million people. In the last 10 years CCI Pakistan has almost doubled its market share.

Speaking at the occasion Mr. TuncayÖzilhan, Chairman Anadolu Group and Coca-Cola İçecekstated, “I am extremely proud to be here today for the opening of CCI’s Faisalabad Greenfield Plant. When we decided to invest in Pakistan back in 2006, we were very confident about the future of this nation. And today I’m pleased to see how our combined efforts have materialized and brought us such a long way in these last 12 years. We continue to expand our investment and business in Pakistan, as is evident from this project being inaugurated today. Knowing Pakistan’s friendly and hardworking people, trusting Pakistan’s talented workforce and promising youth and fascinated by the very rich and diverse culture of this nation, I can, once again, affirm my belief in the future of this country.”

Also speaking at the occasion CCI Pakistan General Manager, Mr. John M. Galvin said:“We have had a great start to 2018. In addition to the Faisalabad inauguration we also launched our new water brand Dasani earlier this month. We have further diversified our portfolio with the launch of Monster and Mutant in the energy category.” 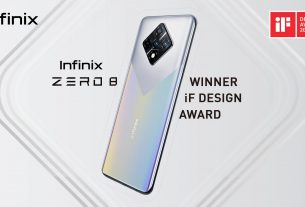 Infinix won the iF DESIGN AWARD 2021